Why is Peat Used in Scotch Whisky?

The story of peat and whisky and why it’s used by some peated scotches in the whisky distillation process. 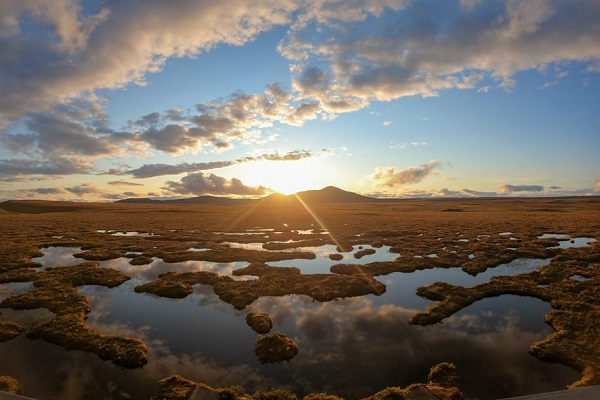 Often you will see the terms peated and peatiness to describe a scotch, but what do they actually mean? What is peat and why is it so important? In essence peat is the compressed remains of rotting plant matter which have been mushed together into an aromatic fuel that when burnt during the malting process imparts a variety of smoky and oily flavours into the scotch whisky.

As described above peat is rotting vegetation and plant matter which forms in oxygen deprived bogs over thousands of years, each layer compressing the previous ones into a thick crust. Peatlands are the most efficient carbon sink on the planet and are extremely important ecosystems, which is why they are heavily protected in modern times.

Most of Earth’s peatlands can be found in regions where the towering glaciers which covered the northern hemisphere 12,000 years ago began to retreat at the end of the Ice Age. This left behind huge gouges in the landscape which filled with melted run-off water, forming bogs in regions where the soil was acidic and anaerobic. As the millennia wore on these regions gradually built layer upon layer of peat, forming the modern peat bogs that dot the landscape.

These conditions can be found across the globe such as Germany, Ireland, Scandinavia, parts of Russia and Scotland. Peat bogs can be found in much smaller quantities in other regions of the world such as Japan and New Zealand, however they are more often anomalies of circumstance and are limited to extremely specific hydrological systems.

How is Peat Used in Whisky?

Peat burns well and for a long time, with humans having used it as a fuel source for thousands of years, from heating homes to fueling kilns. In particular peat was used in the whisky distilling process, especially in regions such as the Scottish Islands where trees were rare and coal deposits were either non-existent or out of reach without modern technology.

In the scotch distilling process, malting is the process where the barley is steeped in water to kick off the germination process, meaning that their starches become soluble in the water. This allows microorganisms to break down the released sugars and convert them into alcohol.

The barleycorn is then introduced to heat in a distillation kiln to halt the process to prevent too much growth by germinating barley and consuming all the starch. Peat is used in this vital stage to fuel the kilns, and when burnt produces a distinct aromatic smoke. This imparts chemical compounds called ‘phenols’ into the barley, contributing to the overall flavour and profile of the resulting scotch whisky.

What’s the Difference Between Peated and Unpeated Whisky?

During the industrial revolution and the expansion of railways across Scotland, peat fell out of favour among many whisky distillers. Coal and later coke, a smooth burning substance created from heating coal in an airless environment, came to replace peat in regions where it became more affordable for distilleries. This is why unpeated scotches are more prevalent in regions such as the Lowlands and Speyside where the railways came earlier, allowing for easier access to coal. Meanwhile in the remoter Highlands, Islay and Islands peat remained a more viable alternative and eventually became the tradition of many distillers in these terroirs.

Unpeated whisky tends to have a much lighter flavour and is often complemented by more fruity or vanilla notes, while peated whiskies are often much smokier with sometimes oily notes.

So What Does Peated Whisky Mean for Cask Investors?

Due to peated whisky being an integral part of the history of scotch, often peated whiskies from certain distillers hold appeal in their cultural heritage as a part of Scotland’s rich history, making them valuable for collectors.

The niche nature of peated scotch whisky casks holds great value to connoisseurs who often examine the ‘peatiness’ of whisky. The peat content of a scotch whisky is measured in phenol parts per million (PPM), running on a scale from 0 to 309ppm. The current modern record holder, the Bruichladdich Octomore 6.3, sits at around 300ppm. The average ‘heavily’ peated whisky on average is 30ppm, although this figure can be misleading with brands such as Laphroaig tasting stronger than the ppm figure would show. Even unpeated scotches contain trace amounts of phenols although these are almost undetectable.

These two factors combined mean that when classic brands produce peated whisky casks a lot of hype is generated in the markets as often these releases can become collector’s items after a decade or so. Such is the popularity of peated whisky that India imports peat all the way from Scotland to use in its own domestic brands such as Amrut.

If you are interested in finding out more about cask whisky investing, get in touch with us using the form below.