Beanie Babies: Why not all Collectibles are Investments

What makes a luxury asset an investment rather than just a collector's item? In this article we take a look at the Beanie Baby craze of the 2000s to understand how overhyping happens. 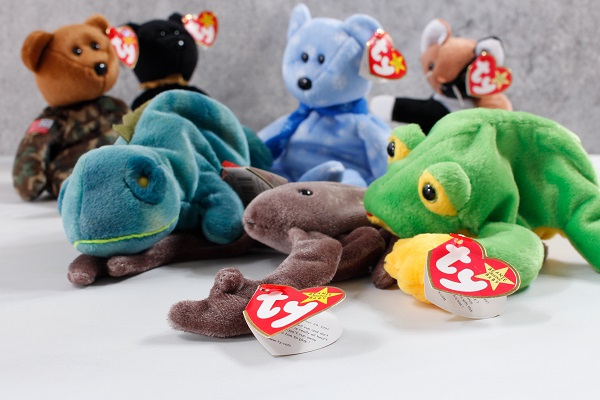 Recently various publications have reported on a study by Russian researchers, stating that LEGO is more profitable than stocks and bonds. This in a way is unsurprising, as a collectible item LEGO makes sense, its high quality production, enormous fanbase and its nostalgic appeal rising as the generations which grew up with it are now at the height of their purchasing power. For investing, however, this LEGO story reminds our analysts of the excitement of Beanie Babies during the turn of the millennium. In this article we will examine the difference between a purely collectible item and a tangible asset for investing, something that people can be mistaken for, resulting in disastrous consequences.

During the late 90s to early 2000s, buzz spread rapidly of the stuffed toy animals called Beanie Babies being extremely valuable to collectors, with them making up 10% of all sales on eBay. Sometimes they would go for over 30% of their retail value, which resulted in some of the most bizarre smuggling rings, divorces and tragically murder. People hoped that with the right stuffed animal, they would be funding their child’s university education. All of this was not to last, at present Beanie Babies are largely sold by the bag’s weight, other than the rarest and most mint condition. So what makes an actual physical investment as opposed to a hyped collectible?

As you can probably guess, producing Beanie Babies was neither time consuming nor expensive. The parent company was very much capable of producing an inordinate amount of stuffed animals, however, they didn’t. Instead as part of marketing their toy they restricted the sales of Beanie Babies to just 36 of a certain animal to a certain retailer. This ensured that there was a scarcity of particular Beanie Babies and could often mean that queues of people would form outside of toy shops whenever new stock came in. This is what is known as an artificial scarcity where the manufacturer holds back on producing stock to ensure that demand is greater than supply.

For collectibles and other physical assets it is important to identify the roots of the scarcity. Is the item expensive or time consuming to produce? Is there only a certain amount of them that can be made a year?

The reason Beanie Babies were a poor investment choice was that they were cheap to make, and other than their designs, were largely made of the same materials as other stuffed animals. This meant that their value was entirely rooted within their artificial scarcity and public perception of value. There was no great need for craftsmanship nor are their base components valuable on their own.

Meanwhile watches make for great investment luxuries as they are very much in the opposite position. There are a limited number of luxury watches produced each year due to the high levels of craftsmanship from a few professional artisans in Switzerland. The materials used to make these watches are also valuable in and of themselves, often due to the usage of various precious metals.

Whisky is an interesting case for the materials that actually go into scotch are cheap, consisting of water, yeast and grain. However, whisky has the property of actual scarcity, due to the fact that distilleries can only produce so many litres a year. Then the whisky must mature in a warehouse for at least three years, a process that cannot be falsified. What this means is that whisky’s value is based on the lengthy production process which means that demand always outstrips production.

Furthermore whisky is an interesting case, being one of the few luxuries that actually appreciates in value with age, unlike most other items which risk wear and tear depreciating them. For many, the older the whisky the greater the taste, this means that older whiskies sell for substantially more than their younger counterparts.

The next factor to examine is how well established the luxury is in the eyes of the public. Older brands will always perform better and can embody a timeless nature, meaning that their prices remain far more stable.

If we examine the luxury watch market, only a select few of the very largest brands can be expected to deliver returns: Patek, Rolex, Cartier etc. Each of these companies is over a century old and have had a long time to embed themselves into the public consciousness as the epitome of luxury. This rich history has allowed them the time to develop their brands into maturity, moving from simple marketing to weaving a complex mythology.

Nowhere can this be seen more prominently than in the classic car market, the age of the brand and model is one of the most important factors. While certain Tesla models sit on the upper end of the luxury vehicles, nobody would consider them a classic car simply because they are too modern.

Overall a number of factors weigh into whether a collectible item is suitable for investment, ranging from the costs of production to how well established the category is. If you want to find out more about the world of luxury asset investing, contact us.