Over the centuries, whisky has been through peaks and troughs. In this article we will examine the factors that caused one of the greatest collapses in the history of scotch - The Pattison Crisis. 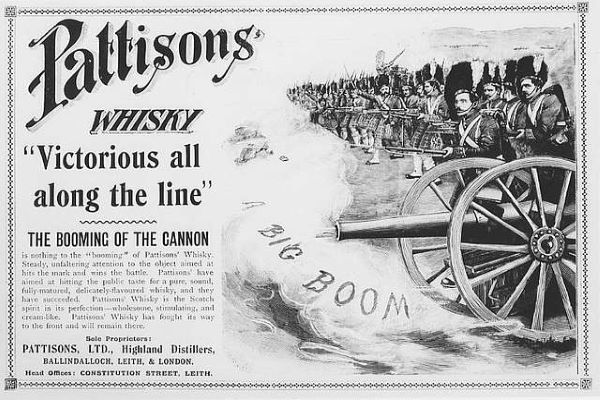 Over the centuries, whisky has been through peaks and troughs. In this article we will examine the factors that caused one of the greatest collapses in the history of scotch - The Pattison Crisis. This is in order to understand what factors led to such turmoil and how the industry as a whole reacted to avoid repeating the mistakes of the past.

The last decade of the 19th century was marred by the infamous Pattison Crash in 1896. Originating as Edinburgh based dairy wholesalers, Walter G.G. Pattison and Robert P. Pattison would begin producing whisky in 1887. Two years later the two would go public raising around £100,000 for the brothers, during a period of boom for the whisky industry. This was mainly due to the devastating impact of phylloxera beetles decimating the grapes of its main competitor brandy. At this early stage the Pattisons were predominantly focused on creating various blends, with a number of distilleries helping to contribute to its products. The two most notable of their products being Morning Dew and Royal Gordon.

By 1896 they incorporated as Pattisons Ltd. due to the popularity of their blends, and thus they began to expand their business rapidly. After buying up over half of the shares in the Glenfarclas Distillery and further interests in Aultmore, Oban and Ardgowan the company was set for dominance.

However, this was not to last, since the brothers unfortunately had rather extravagant spending habits. Determined to grow their brand as quickly as possible, an army of 150 sales people were hired, which far outnumbered their competitors. Furthermore the brothers spent almost £60,000 on marketing, which adjusted today would equate to £4.3 million. Although perhaps the most infamous act of the two maverick brothers was when they presented 500 African grey parrots to their various vendors, which according to legend would repeat the phrase “Buy Pattisons!”. In their personal lives, the brothers purchased a number of country estates and had a penchant for private trains and ‘marble offices’. All of these costs would add up, and the brothers would quickly resort to financial fraud in order to keep up. By 1899, the annual production of scotch whisky had reached almost 36 million gallons, with the Pattison’s contributing to almost 40% of that figure. The cooked books meant that other companies were overproducing to match a demand that simply did not exist, resulting in more and more companies being drawn into this vortex of overspending.

Things would come to a head when in 1899, Distiller’s Company Ltd. (DCL), froze the Pattison account due to an outstanding balance of £30,000. Soon after other suppliers and distilleries began to notice the discrepancies and stalled payments and the whole scheme began to unravel. The brothers had garnered much of their capital from banks and creditors who had been attracted by their inflated sales figures and the entire house of cards would come crashing down. By 1901 both brothers were arrested and charged, Robert faced a sentence of 18 months and Walter 9 months, although the public were outraged at the short terms.

The trial would also unveil that in order to cut costs the brothers had been substituting the whisky with extremely cheap low quality blends. Ultimately this left trust in the whisky industry utterly shattered, with an enormous amount of casks with dubious quality spirit inside. Numerous creditors, bottlers, distilleries and suppliers would go bankrupt having placed much of their faith in the two scammers. By 1933, only 15 distilleries were left in Scotland, partially from the extended fallout of the crisis.

However, the spiralling death of the industry cleared the path for the brothers’ main competitor DCL to further consolidate their place in the whisky market. Eventually DCL would become the industry leviathan, Diageo.

The Pattison Crash served as a warning to the whisky industry about the dangers of overestimating consumer demand. In the modern day, companies such as Diageo carefully monitor their own stock to ensure that quality is maintained and that instead of bold marketing aspirations leading the way, that actual supply and demand is cautiously tracked. Further security is provided by the careful watching of HMRC to prevent dodgy blending practices and the security of stock. Industry bodies such as the Scotch Whisky Association (SWA), which represents 95% of the entire scotch whisky market, helps to ease communication between distilleries and companies to further ensure issues of overproduction are avoided. Also the industry is far less reliant on the UK market alone, with the UK not even being within the top 10 largest markets for scotch whisky in 2021.

It is important for whisky investors to understand the trials of the past, in order to offer greater security for their investment and to avoid repeating similar such mistakes. Read more about the history of whisky in our other article about the Prohibition.