We are delighted to announce the return of our Meet the Pros YouTube series, for its second season, giving our viewers the chance to learn more about the fascinating world of whisky investment and see some of the best whisky bars in London! 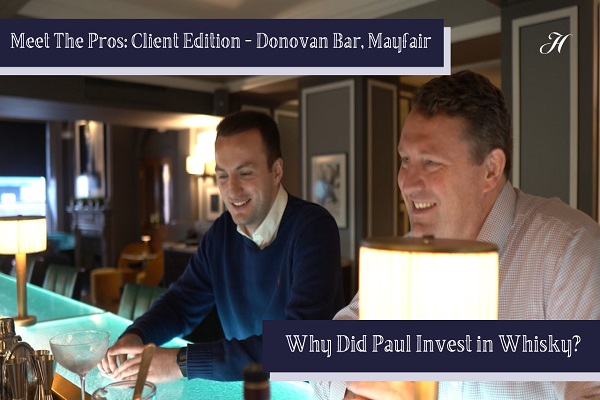 We are delighted to announce the return of our Meet the Pros YouTube series, for its second season!

In season one of Meet the Pros, our team travelled across London to check out some of the best bars, speak to top mixologists and try some unexpected and delicious whisky cocktails. The series was created in order to tackle some of the misconceptions surrounding the whisky industry and those who enjoy the water of life.

Our highlights from season one included a £300 shot of Balvenie, a whisky cocktail served in a bowl, the London women’s whisky community and in the finale a selection of cocktails inspired by our team’s favourite movies. We’re delighted to have received such a fantastic response from you all, with the series accumulating over 68,000 views!

For season two, we decided to mix things up a bit, with some special guests joining us! We invited our clients over at Hackstons to come and join us as we explore more whisky venues and try some delicious cocktails. In our first episode of season two, Glen and Paul visit one of the oldest hotels in London to sample some gorgeous whiskies. You can watch the first episode here.

As part of season two, we’ve also included something extra special for our viewers. Whabble - Whisky Scrabble! Pay attention to the screen as we reveal an anagram that spells out a distillery. The prize? A bottle of something special from the distillery itself!

We’re really excited for you all to get the chance to view the rest of Meet the Pros - Season 2, be sure to check back weekly for each new episode. We would like to thank everyone who has contributed to the series so far, and for making it such a fantastic success!